In mid-February the legendary Fenway Park Stadium in Boston, USA became the showcase for a world-class ski and snowboard event. And centre stage was a GEDA 1500 Z/ZP transport platform from Bavaria.

On 11 and 12 February Boston became the Mecca for the ski and snowboard elite when the Big Air World Cup took place in Fenway Park Stadium. The mega-event was held in the 103-year old stadium which normally hosts the home games of the famous cult baseball team, the Boston Red Sox. 60 freestyle skiers and snowboarders entered the competition to be scored against each other in a series of breakneck jumps and to win USD 150,000 in prize money. 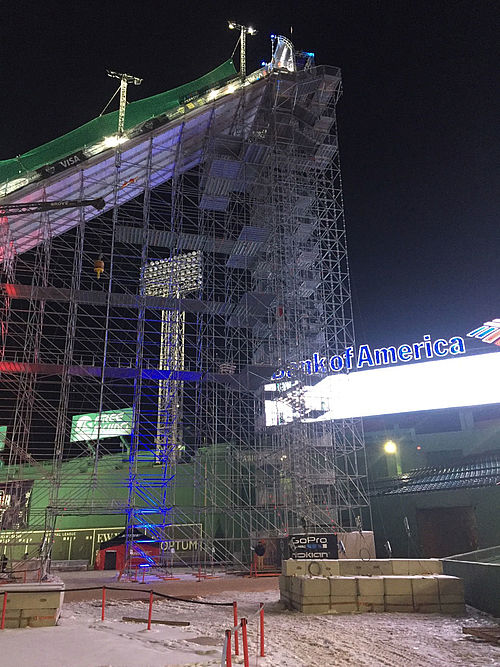 Steeped in history, Fenway Park Stadium provided the 27,228 spectators with an unusual, but all the more spectacular, vista with the huge ski jump structure being the absolute eye-catcher. It was an incredible 43 metre high monster that virtually filled the entire interior of the stadium and justifiably astonished the public.

And a GEDA transport platform was centre stage, rather than just a spectator

The ramp was supported by a huge scaffold construction and it was precisely here, on the mega-ramp itself, where a transport platform from the Bavarian manufacturer
GEDA-Dechentreiter GmbH & Co. KG made its huge appearance. During the event the GEDA 1500 Z/ZP transport platform transported the freestyle athletes easily and quickly to their start point up in the dizzy heights.

The unique benefits of the GEDA transport platform shone through for all to see during its use in Fenway Park. The device has two separate control systems and it can be used both as a pure materials lift and also as a transport platform for materials and people. In contrast to conventional materials lifts, in which the transportation of people is strictly prohibited, as soon as the GEDA 1500 Z/ZP is switched to “transport platform” mode of operation, in addition to loads, people are also permitted to be transported.
The spacious loading platform of the GEDA 1500 Z/ZP is designed for a load capacity (people and/or loads) of 2,000 kg, has plenty space for heavy and bulky materials and therefore ensures optimum logistics on construction sites and also at events like the Big Air Cup.
With a hoisting speed of 12 m/min in people transportation mode (24 m/min for pure materials transportation), the adrenalin junkies in Boston were quickly transported upwards. 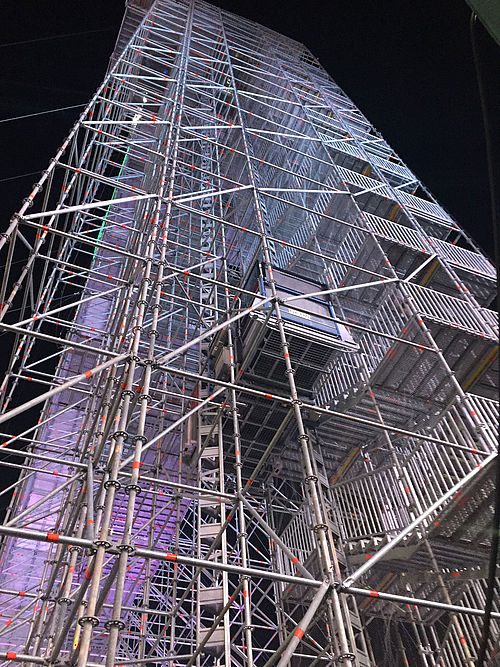 The customer has a range of platforms to choose from when selecting the most appropriate for each intended use. The practical modular construction means there are many different combination options.
The GEDA 1500 Z/ZP is guided along two steel masts. This two-mast system has already been used successfully many times and ensures a smooth and stable travel movement up to a height of 100 metres.
Even for a daredevil event such as the Big Air World Cup, the GEDA 1500 Z/ZP combined device is naturally equipped with the usual safety equipment such as limit switches, speed-dependent safety gear, safety stop and overload protection. The automatic lubrication which ensures significantly lower wear and tear on the toothed rack and pinions is included as standard.

The mega-spectacle was crowned for Germany when Lisa Zimmermann won the Big Air Weltcup for freestyle skiing and in so doing secured her place in skiing history. The jury assessed her performance in Boston as 0.20 points better than Emma Dahlström, the Swede in second place. However, in 2016 the GEDA 1500 Z/ZP scored top points in the categories of “reliable assembly” and “easy transportation” onto the mega-ramp. This is because it is not only on construction sites across the world, but also at unique events such as the Big Air World Cup, where the GEDA lift solutions demonstrate their professional qualities.