The lignite-fired power plant in Šoštanj, Slowenia provides one third of the total power generation of Slowenia. A huge reconstruction programme has now been reducing the emission of harmful environmental effect for years. The block 6 is being built at the moment.

Its sighted performance accounts for 545,5 MW. The estimated time of operation is 40 years. After completion of the power plant Šoštanj, a yearly 4,700 GWh electricity output is planned compared to now 3,600 GWh.

Since November 2011 the construction of the cooling tower has going on. The jacking formwork and the material and personnel hoist are rising simultaneously upwards. The temporary construction hoist of the German company GEDA will be rented out till end of June 2012.The hoist is erected to a height of 156 m and has a lifting speed of 40 m/min. In total 25 persons and material with a weight of 2,000 kg can be transported. The hoist works together with a so-called climbing formwork. The hoist car can be loaded and unloaded at the platform of the telescoping formwork by an additional exit, a so-called D-door on the inside of the car. The second exit is placed on level of the deck of the bridge. The combination of climbing formwork and hoist guarantees an efficient progress of the construction work.

The base unit of the GEDA PH 2032 hoist and also the appropriate mast units are manufactured especially to meet the requirements of the cooling tower structure and to compensate the inclined drive at an angle of 20 at the ground station to -2 at the top. GEDA produced special stainless-steel anchoring plates in order to fix the hoist to the cooling tower. For the fixing process telescopic assembly platforms were especially designed for this project in order to simplify the anchoring. The anchoring plates were already set in concrete. Thus not only preventing the cooling tower from damages but also fastens the process of erecting the hoist. Moreover the plates are later available for maintenance work.

The safety at entry and exit points is ensured by GEDA landing gates which meet all requirements set by the latest European Machinery Directive 2006/42/EC. Different landing gates from the extensive GEDA range are being used to address various instructions and preconditions. Needless to say, safety features such as the speed-dependent GEDA over-speed safety device and overload protection are part of the standard package.

The German manufacturer delivers personnel and material hoists, industrial lifts and building maintenance units all over the world. GEDA’s product range includes from 60 kg rope hoists up to 3.2 t personnel hoists with lifting heights up to 400 m. 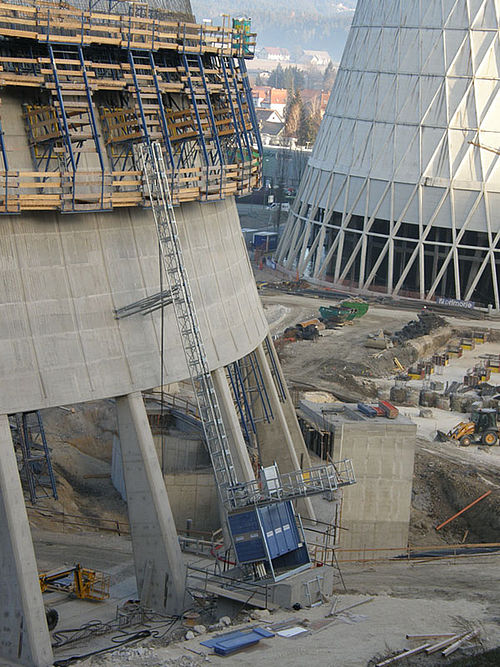 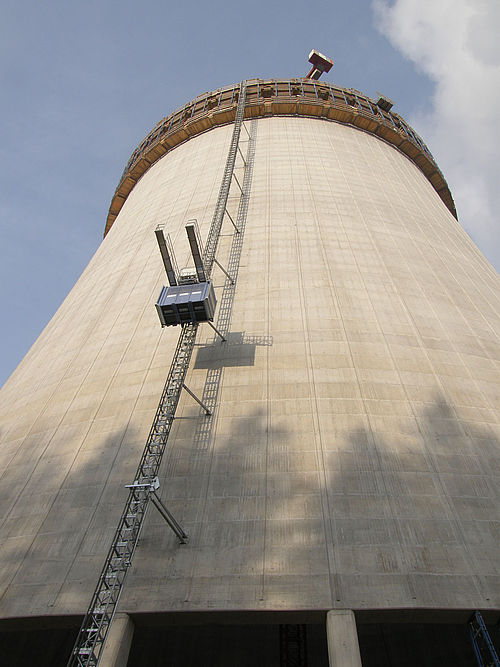