From Thuringia to the desert state of Kuwait

First GEDA building maintenance unit in Kuwait city in use 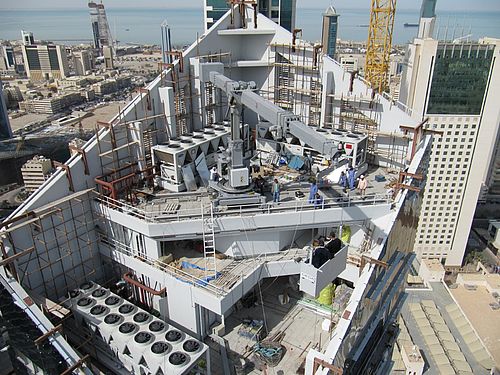 From Thuringia to the desert state of Kuwait

First GEDA building maintenance unit in Kuwait city in use


At present in the growing business centre of Sharq city in Kuwait city, two architectural, very impressive high-rise complexes are being built. Both buildings are named after the national day and immediately subsequent liberation day of Kuwait: 25 / 26 February Towers. With 37 floors (25 February Tower) and 32 floors (26 February Tower), both towers will be an eye-catcher of the skyline of Kuwait city.

The main focus of the investors is to apply advanced technologies. Therefore, it is no wonder that the company GEDA-Dechentreiter GmbH & Co.KG was commissioned to supply the appropriate building maintenance unit "made in Germany".

Installed on a 160 m high building

The development department at GEDA was confronted by a particular challenge during planning of the project: A requirement of the investors was that all areas of the structure must be accessible using the telescopic and luffing jib, despite the extraordinary structure of the building and roof – of course, no problem for GEDA!

The unit moves on rails installed on the roof of the building. So that the unit can depart from its park position at the start of work, it is extended 2 m vertically by a stand. For this, a rack and pinion drive is used. The maximum length of the jib is 15 m: the 8 m long arm can also be extended using a rack and pinion drive by a further 7 m. Because of the inclination of the glass roof, the jib must be luffed by 27°. This is provided by a spindle drive. The clou is that the unit is virtually "invisible" in the park position and, thus, does not in any way impair the overall architectural image.

The rich desert state of Kuwait on the Persian Golf is now even richer through a high-tech building maintenance unit made in Germany. "We can proudly purport that our products have found their way to the Near East and, in the future, will also be used for the most diverse, demanding objects", stated Andreas Ewert, GEDA Project Manager for Kuwait.