GEDA at the Royal Wedding

What do David Beckham, Elton John and GEDA 1500 Z/ZP have in common? The honour of having been present at the wedding of the year 2011! 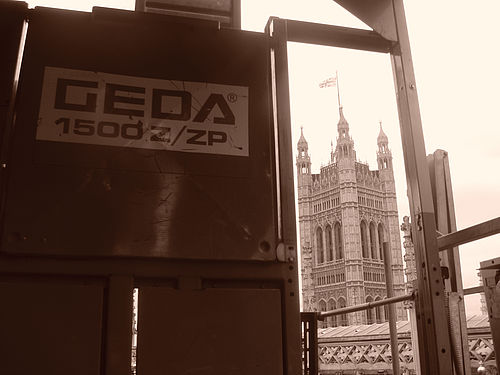 Thousands of visitors descended on London on April 29, 2011 to see the spectacle of the century with their own eyes. A very special day for British monarchy indeed: Prince William married the commoner Kate Middleton. A GEDA transport platform for persons and material made in the Bavarian town of Asbach-Baeumenheim was positioned at the very front of the venerable Westminster Abbey.

Since May of 2008, the GEDA 1500 Z/ZP platform has been used for re-roofing as well as restoration and repair works on the ornate stonework of Westminster Abbey. GEDA`s long-term partner, Southern Hoist
Services from Shedfield in Southampton, leased the transport platform to the building contractor Noble & Taylor Ltd. in Ongar, Essex.

Installed in front of the scaffolding

The GEDA 1500 Z/ZP transport platform has been installed at a height of 24 m in front of scaffolding. The main issue for Noble & Taylor Ltd. was that beyond the necessary attachment of the scaffolding itself, no additional attachments could be anchored in the unique structure of the abbey's facade. The GEDA transport platform for persons and material offered the ideal solution to this problem, as it can be anchored directly on the scaffolding.

The restorers made a conscious decision in favour of the platform model 'ED' with roof by the Bavarian elevator manufacturer. Easy loading and unloading of the platform (floor area of 2.9 x 1.65 m), a load capacity of 1,500 kg for the transport of persons, and 2,000 kg for the transport of materials were the deciding factors. These were prerequisite for the safe transport of material and personnel needed for the restoration work on the abbey. The solution furthermore contributed to improved logistics on the entire construction site. Since the existing scaffolding has a limited load bearing capacity, a lift had to be employed that would meet all the requirements: and the highly disciplined GEDA 1500 Z/ZP transport platform ticked all the boxes for the restorers - "Absolutely perfect, old boy!"
In order to ensure safe transfer from the load platform to the scaffolding, two separate loading points are equipped with hot dip galvanised GEDA landing level safety gates with mechanically locked sliding doors.

GEDA has become part of a thousand-year-old history

The history of Westminster Abbey reaches almost 1000 years into the past, and is one of the most visited attractions in London. These visitors are not just tourists but also foreign and domestic dignitaries as well as members of the royal family stop by there as well. It was therefore understandable that the construction work around the abbey had to be kept as low key as possible as to not disturb church routine.

The use of the GEDA 1500 Z/ZP 'Made in Germany' transport platform allows the restoration work to progress swiftly. And of course: nothing would stand in the way of Prince William marrying his Kate at the ancient abbey of the royals. Quite a shame, though, that the newlyweds didn't get a chance to take a little 'ride' on the GEDA 1500 Z/ZP to wave to their entourage from lofty heights. Nevertheless, the transport platform is doing a marvellous job for London's premier church. 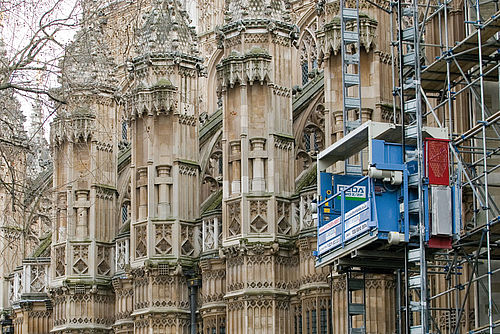 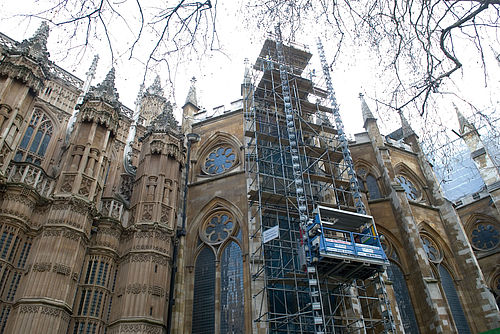