Temporary construction hoist and permanent service hoist for the construction of “Sava Bridge” in Belgrade delivered.

The German hoist manufacturer GEDA-Dechentreiter GmbH & Co.KG struck twice: two hoists were delivered for the new construction of a multilane bridge over the river Sava in Serbia’s capital Belgrade.

„All from one source“

True to the motto „all from one source“, namely already from preparing the offer on up to the appropriate service, GEDA was able to convince company PORR. GEDA received the order for a temporary Personnel and Material Hoist GEDA PH 2032 and a permanent Service Hoist GEDA SH 300. The focus of the Porr-consortium was on a perfect and professional performance of the project as well as the service at site. Due to the existing cooperation with the local company Unimast no problem for GEDA!

With its roadway width of 45 m the 929 m long Sava Bridge is dimensioned wider than the average. The 200 m high and architecturally extraordinary pylon of the bridge will for sure become the new landmark of the Serbian capital Belgrade (which means translated as much as “white city”).

In the past years the traffic volume has rapidly increased. Especially the existing roads between the city centre and New-Belgrade district are affected by this. By the new construction of the cable-stayed bridge the tense traffic situation shall be relieved.

The temporary construction hoist GEDA PH 2032 is going to be in use on the pylon during the construction phase. The hoist is erected to a height of 186 m and has a lifting speed of 40 m/min. In total 25 persons and material with a weight of 2,000 kg can be transported. The hoist works together with a so-called climbing formwork. The hoist car can be loaded and unloaded at the platforms of the telescoping formwork by an additional exit, a so-called D-door on the inside of the car. The combination of climbing formwork and hoist guarantees an efficient progress of the construction work. The second exit is placed on level of the deck of the bridge. For this it was necessary to create a tailor-made opening for transit purposes of the hoist in the future roadway.

Because of the needle-shape of the pylon and the fact that the inclination is getting bigger and bigger the higher it gets, there was also need for a hoist which is able to level the inclination. The base unit of the hoist and also the appropriate mast units are manufactured especially to meet the requirements of the pylon structure and to compensate the inclination. GEDA produced special stainless-steel anchoring plates in order to fix the hoist to the pylon. For the fixing process telescopic assembly platforms were especially designed for this project in order to simplify the anchoring at the pylon.

Service hoist inside the pylon

While the construction hoist is still in use already the service hoist GEDA SH 300 with a height of 100 m was permanently installed inside the pylon. The particular challenge was to fit the hoist into an extremely small-sized shaft with dimensions of only 1.2 x 1.2 m while an inclined drive at an angle of 2.4 needed to be fulfilled. With a lifting speed of 60 m/min the service personnel is reaching its working areas fast and safe. Thanks to the professional GEDA engineering it was possible to meet all customer requirements.

“The GEDA hoists “made in Germany” are doing an outstanding job during this big bridge project and GEDA is convincing as a competent overall supplier in the field of hoists”, Kazimierz Wasilczyk, GEDA Area Sales Manager for Serbia, explains. Completion of the project is planned for 2012. 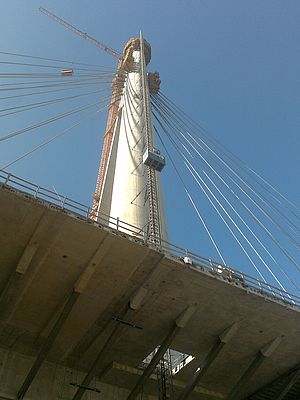 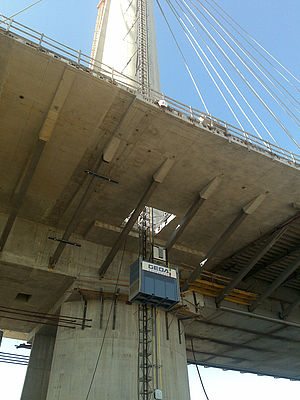 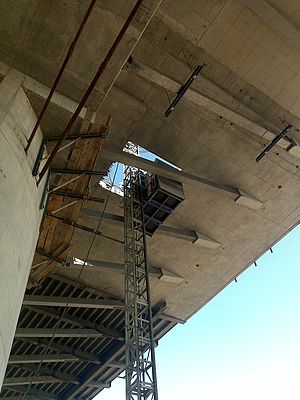