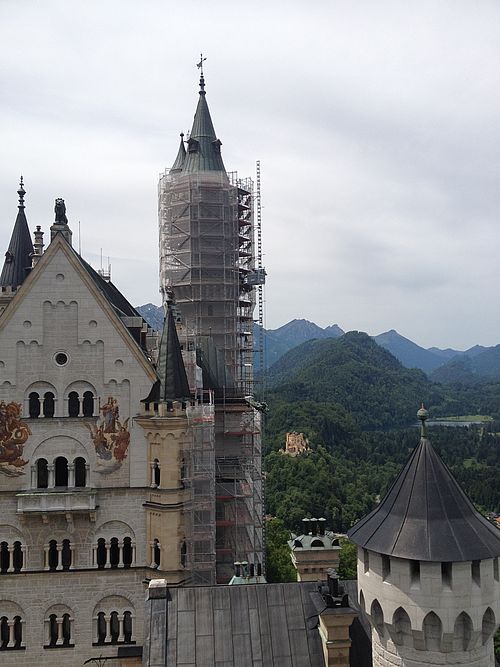 Is it possible for a Bavarian manufacturer of construction hoists to imagine a more beautiful backdrop for a construction site installation than the awe-inspiring Schloss Neuschwanstein in their Bavarian homeland? Absolutely not!

Two GEDA 500 Z/ZP transport platforms are currently being used at Schloss Neuschwanstein – often described as a "Fairy-tale Castle" – in Hohenschwangau in Southern Bavaria.

When King Ludwig II of Bavaria started the building works in 1869 on his "Neue Burg Hohenschwangau" – as it was then called – he would have been very grateful for the most helpful transport platforms that are now being used in the refurbishment of the west and north façades.
The unique façade is currently covered in scaffolding so that the refurbishment to the natural stone walls can be carried out. The setting of the famous castle could not be more idyllic. However the limestone façade is permanently exposed to the tough Bavarian Alpine climate which of course has left its traces on the walls. Cracks into which water can penetrate must be repaired and the joint mortar must be replaced. Small plants have also taken root in the masonry which now have to be removed.
With the refurbishment of what is known as the "weather side", currently the fifth and last building phase is in full swing. 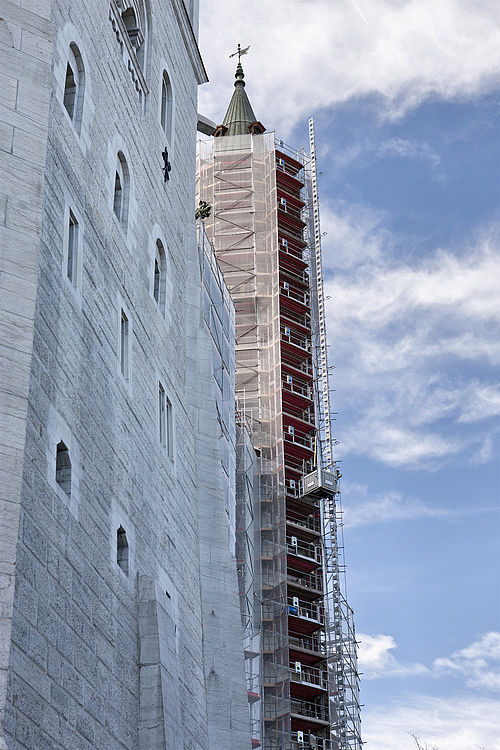 Like a fairy-tale: the fast and safe upwards transportation of people and materials

Of course a very specific challenge was the actual fixing of the scaffolding onto the castle itself, since at the foot of the building there is only a steep mountain slope. It was one of GEDA's partners, BSB Franke & Wagner GmbH, who was faced with this challenge, as the on-site logistics were anything but routine. The scaffolding material was delivered over various phases and then transported using a GEDA 500 Z/ZP to a first assembly platform at a height of 10 m. This platform was erected in the rock itself by the scaffolding installation company and it was from there that the scaffolding materials were distributed to the complete west and north façades. Without the GEDA 500 Z/ZP the transport of the scaffolding material would quite simply have been impossible. The scaffolding builders on-site were very thankful that the route upwards had been so safely and rapidly accomplished by means of the GEDA transport platform.
The GEDA 500 Z/ZP is being used by stonemasons and restorers during the repair works. And it is not only the workers themselves who travel upwards on the platform, a wide range of materials and tools are also transported. Another benefit here of the GEDA 500 Z/ZP is that its platform is open at the top so that bulky equipment can also be transported safely and quickly upwards or downwards. 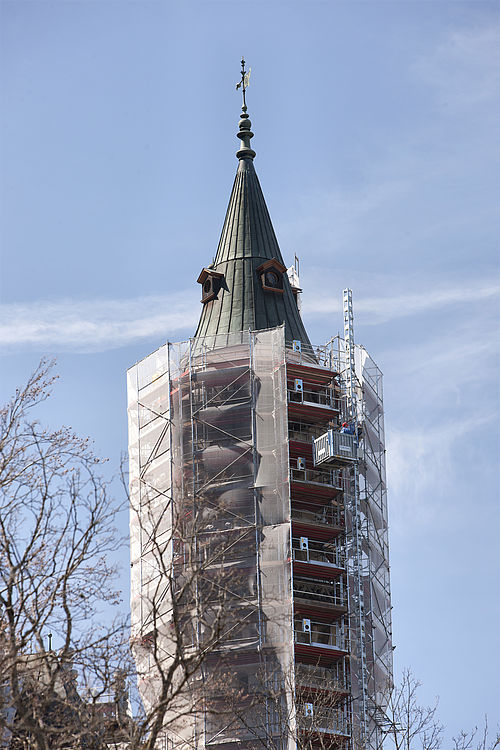 GEDA transport platform on the highest tower of Neuschwanstein
A second GEDA 500 Z/ZP with a construction height of 38 m has been installed on the highest tower of the castle. This transport platform is also in constant use by the specialist workers who reach their place of work at lofty heights.
A total of 15 landing level safety gates have been installed which ensure that in addition to the ground station, 15 additional landings can easily be travelled to. The landing level safety gates ensure a safe transfer from the hoist to the scaffolding.
The GEDA 500 Z/ZP can be used both as a transport platform for a maximum of 5 people and loads up to 500 kg and also as a construction hoist with rated load of 850 kg – therefore it acts as two devices in one!

State-of-the-art resources – then as now

Back then the Bavarian monarch and his architects made use of the latest technologies and materials of the time. King Ludwig II placed great emphasis on the strict adherence to his precise ideas and deadlines. And also today – over 140 years later – the focus is still on the rapid progress of the refurbishment works.
If King Ludwig could only see how advanced building site work is carried out today safely and quickly, thanks to state-of-the-art height-access technology, he would probably turn green with envy.

Schloss Neuschwanstein is one of the most visited castles in Europe. About 1.3 million people visit the castle every year, but for many years scaffolding, tarpaulins and netting have "adorned" the external façade of the castle. The refurbishment works are scheduled for completion by the end of 2012. And then due to the effective support of the two GEDA transport platforms, the countless visitors from across the world will then have an unrestricted view of the beautiful façade. 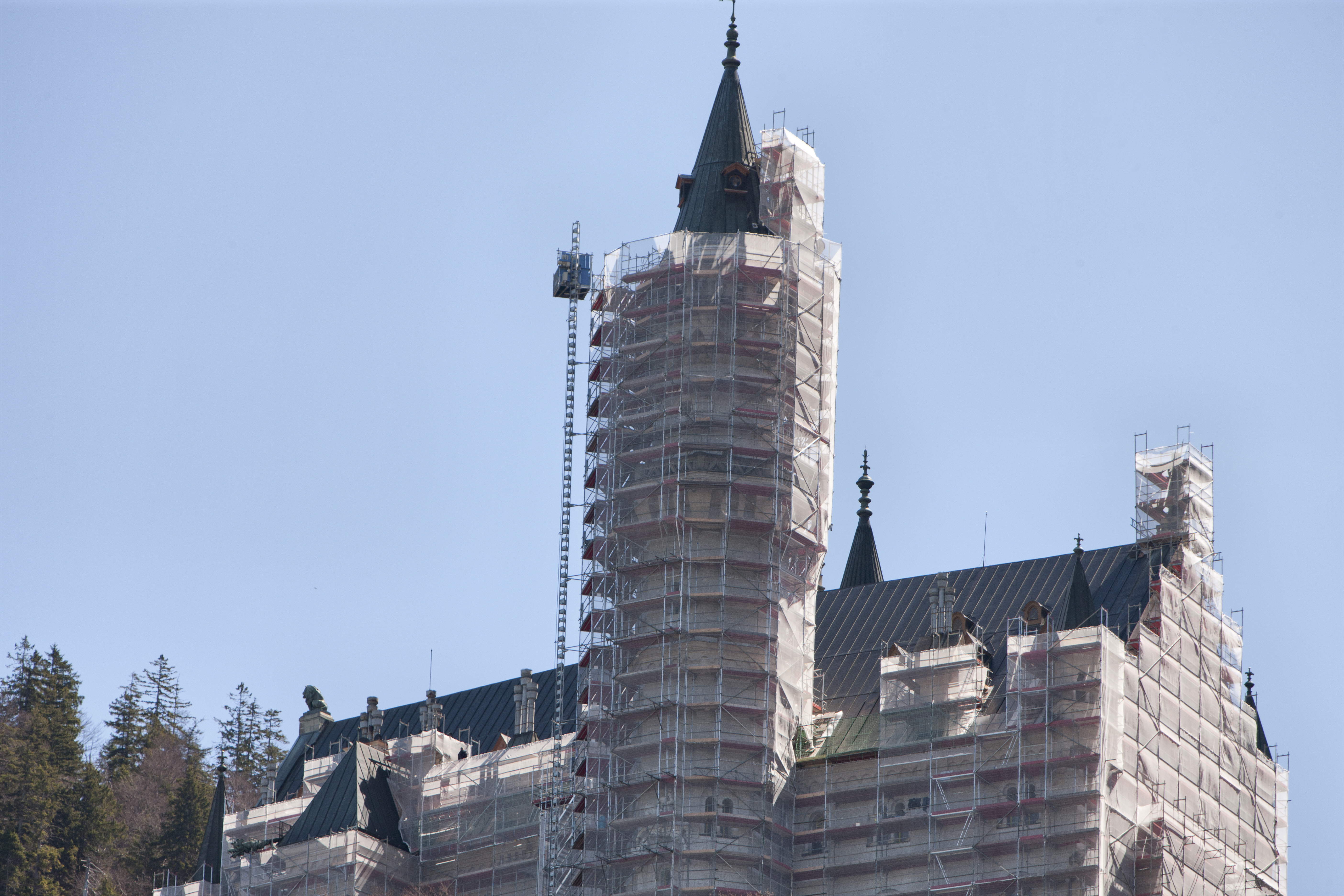