GEDA on a heavenly mission

This is one of the biggest repair projects Bamberg has ever seen. The Monastery site with St. Michael's church soars majestically over the city. However, Bamberg’s landmark is currently hidden behind huge areas of scaffolding because both the monastery site and the abbey are in huge need of renovation. This is a mega-project for all involved. In addition to countless craftsmen from all sectors, nine transport platforms from the manufacturer GEDA-Dechentreiter GmbH & Co. KG are supporting the scaffolding and repair works. 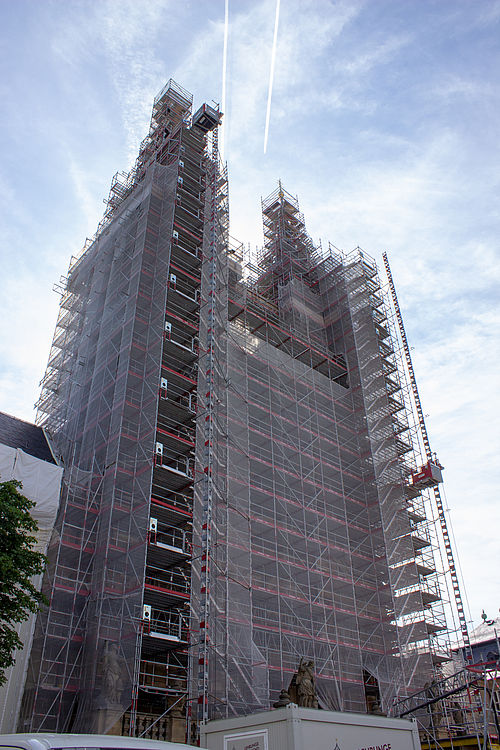 The renovation works started back 2012 on St. Michael’s Monastery which was founded by Bishop Eberhard of Bamberg in 1015.
Built on one of the seven hills of Bamberg, the former Benedictine Abbey with its monastery forms part of the UNESCO world heritage site and is one of the ensemble structures that can be seen far and wide beyond the city limits.

However, the monastery is in acute danger of collapsing. It quickly became clear that the ravages of time had left their distinct marks on the venerable buildings and that the entire abbey and church had to be comprehensively repaired. The dimensions are huge. The church alone is currently enveloped in 12,000 m² of scaffolding, the equivalent to almost two football pitches.

In parallel to the façade work on the former monastery site, repair work on St. Michael’s Abbey with its world-famous ceiling painting, the “Garden of Heaven” is progressing at full speed. These are mainly static repairs. Experts agree that it is primarily the structures added subsequently during the baroque period that are responsible for today’s alarming condition of the romantic structure. Firstly the roof structures, façades, arches and the masonry were made stable and then in the subsequent building phases the enclosing walls, arches, the organ and the drainage were updated to a modern standard.

An estimated budget of EUR 50 million

A total cost of EUR 50 million is estimated for this mammoth project. The works are being carried as part of the federal programme “National urban construction projects for investment in the future” which is contributing EUR 12.5 million, the largest share of the costs. In addition, The Upper Franconian Trust, The Bavaria Compensation Fund, The Bavarian State Foundation, The Bamberg Public Hospital Foundation as the owner of the monastery site, as well as donors and sponsors are supporting the repair works. 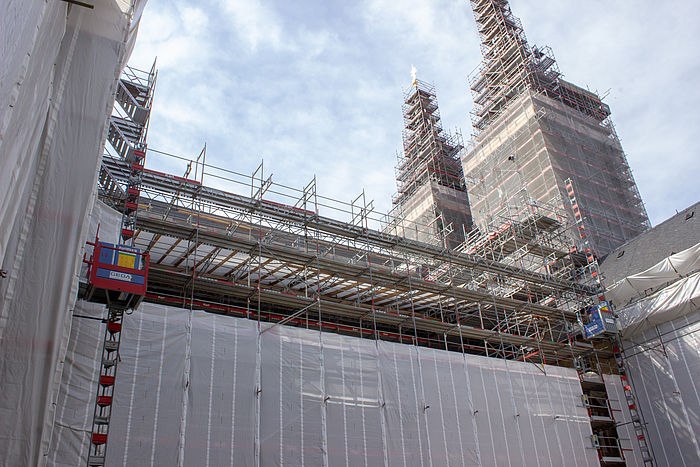 A huge project for everyone involved

Such extensive and costly overall renovations need detailed planning with reliable and professional partners. All the stakeholders are facing huge challenges in the “St. Michael” project. The scaffolding works alone took many months. Given that the tender process for the building site was conducted on a Germany-wide level, it is all the more pleasing that the Bamberg-based traditional company Karl Gerüstbau GmbH was successful in securing the contract. The Karl Group installed all the scaffolding on the external façades of the monastery site and in the internal and external areas of St. Michael’s Church. Even for the professional scaffolding builders, this is a project of superlatives. For the façade works alone, the company installed 10,000 m² façade scaffolding, 1,500 m of bracket scaffolding and an extensive 600 m protective scaffolding for the roofers. The abbey has 5,000 m² of internal scaffolding, 16,000 m³ of birdcage scaffolding and 1,500 m² of surface scaffolding. This is one of the biggest scaffolding projects ever installed in Bamberg.

In order to ensure the rapid assembly of the scaffolding on the venerable walls of the Michaelsberg and to transport both the craftsmen and the necessary materials efficiently and safely along the scaffolding structures, nine transport platforms from the manufacturer GEDA-Dechentreiter GmbH & Co. KG are playing their part.

Safely and quickly upwards into the heavens

The transport platforms are being used both for assembling the scaffolding and for the renovation work on the façade of the monastery site and also on St. Michael’s Church. Two of the six GEDA 500 Z/ZP devices have been installed on both church towers rising up to a height of 73 metres. Roofers, stonemasons and sheet metal workers are tackling the crumbling structure at lofty heights.
The GEDA 500 Z/ZP transport platform has been specifically designed for daily use in tough building site conditions and it is extremely flexible in its use. The device has two separate controls enabling it to be utilised simply as a construction hoist with a payload of up to 850 kg and as a transport platform for five persons and loads of up to 500 kg.
The 500 Z/ZP transport platform is an indispensable aid for rapid assembly of scaffolding as well as for the subsequent tasks required on a construction site. Due to minimal space requirements, the high load bearing capacity and numerous modes of usage, the construction hoist saves time and guarantees optimum logistics in construction. With a lifting speed of 24 m/min in material mode and 12 m/min in person mode, the fast transportation of people and materials is guaranteed. 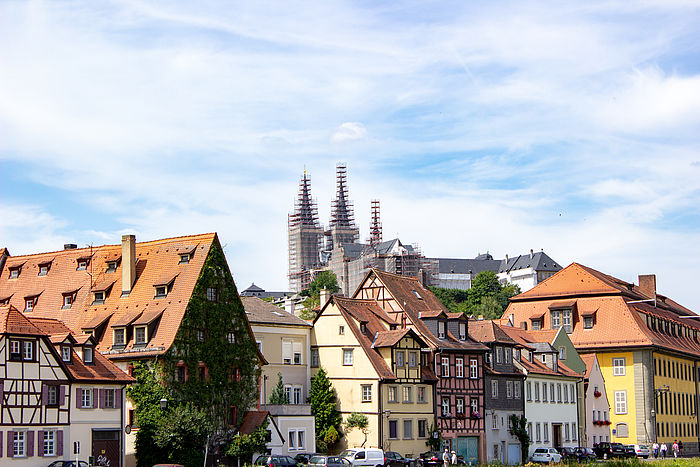 GEDA also offers a complete safety package because the transport platforms incorporate the usual safety equipment such as limit switches, speed-dependent safety gear, safety stop and overload protection. The lubrication device is included with the GEDA 300 Z/ZP and GEDA 500 Z/ZP as a standard, ensuring significantly lower wear on the toothed rack and pinions.
The benefits offered by the GEDA Unimast system should also not be underestimated. The proven mast system can be used with all GEDA rack and pinion hoists from 300 to 2,000 kg load capacity. That keeps investment costs as well as space and storage requirements low, which is particularly important for plant hire businesses.

Originally the responsible parties had planned to reopen the venerable monastery site by 2021 in time for the 1,000 year celebrations. But now it has become clear that the works will drag on a bit longer, with the restoration work now scheduled to last until 2025. When the scaffolding sheathing is removed from the church and the monastery, residents and visitors from across the world will once again be able to marvel at landmark of the Franconian city in all its beauty. Until then future marriage partners will have to be patient because St. Michael’s Abbey is one of the most popular churches for weddings in Bamberg.