GEDA prevails on the Danish coast 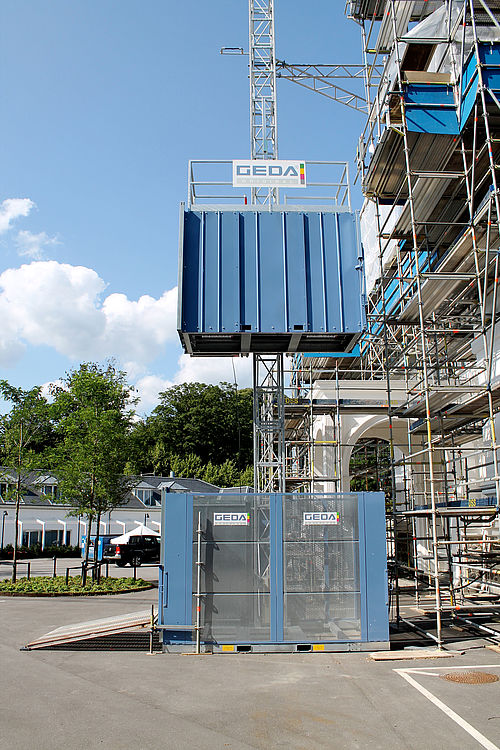 The pure white building located picturesquely on the Danish coast, only a few kilometres north of Copenhagen has a long history to tell. Extensive renovation works have recently become necessary on Hvidore and as a result a construction hoist from the Bavarian manufacturer GEDA-Dechentreiter GmbH & Co.KG celebrated its première in Denmark.
The builder, Frederik Bruun, had Hvidore built by the architect Johan Schroder in 1871 and used the building as a summer residence. Over the years Hvidore had many owners who came and went, including royal inhabitants such as the daughters of Danish King Christian IX and their relatives. The architecture of the building more than met royal requirements and with its blend of Italian and Victorian Renaissance elements, it has the look of a small castle.
Over half a century after the construction of Hvidore, the pharmaceutical company Novo Nordisk acquired the historic building in 1937. Company founder and managing director, Thorvald Pedersen initially converted it into a specialist clinic for diabetics.
Called “The Novo Nordisk House of Education”, Novo Nordisk is now a modern, company-owned conference and training centre for its employees and customers.

However, the ravages of time have meant that extensive refurbishment works on Hvidore were now required. In addition to the renovation of the bathrooms, the roof had to replaced and the windows exchanged for new ones. The - in parts - angled architecture was also a significant challenge for all involved.

Therefore, the rental company Hejs.dk AS decided to equip its building site with height access technology from Bavaria and a GEDA Multilift P22 Comfort, a GEDA 1500 Z/ZP transport platform and construction waste chutes were rented to the construction company responsible.
The latest member of the GEDA Multilift range was impressive in its first use in the far north. 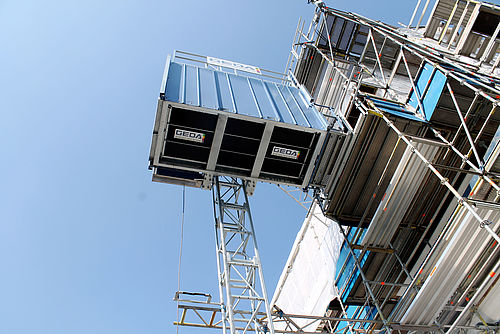 Launched at bauma 2007 the GEDA Multilift Series has already become successfully established in the market and has numerous successful building site deployments to its name.
The new GEDA Multilift P22 Comfort benefited in its development phase from the already proven know-how of the range. For example the complete, pre-installed base unit is delivered as one unit – with perfect dimensions for container loading and for HGV transportation. Long assembly times are now a thing of the past, as work to assemble the device (from the walk-on roof) can start on-site immediately.
The patented flat cable system ensures the fast and safe transportation of people and materials by the GEDA Multilift P22 Comfort up to a height of 200 metres. The assembly height on Hvidore in Denmark was 19 metres including three stories, two of which are fitted with GEDA “Comfort” landing level safety gates. Designed as a space-saving device, the cable carriage provides a convenient access height of only 450 mm.
Another new feature is the assembly car which is a light aluminium car hooked onto the guard rail next to the mast designed to make assembly of the lift easier. The assembly car can also be used with devices from the GEDA PH range. 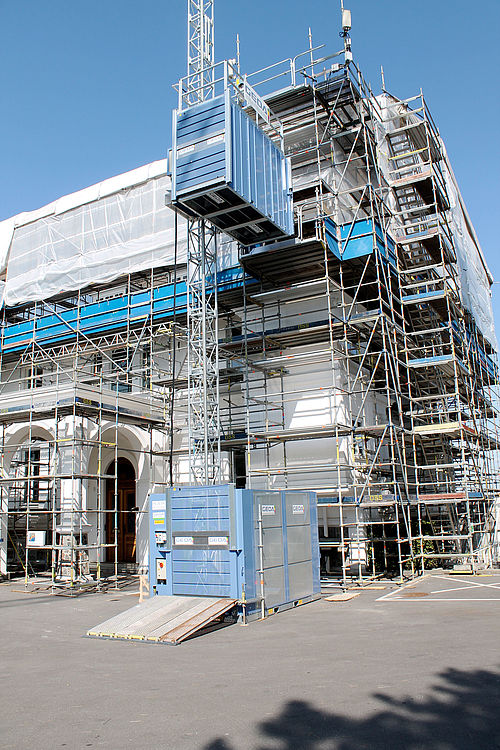 For its deployment in Denmark, the GEDA Multilift P22 Comfort was also equipped with an optional diagnostic system with a display screen that displays a precise error image in the event of a fault, thereby consigning those time-consuming searches for the cause to the past.
With its constant eye on the market, GEDA decided to develop an additional single-mast construction hoist for the GEDA Multilift P22 Comfort. Therefore, the GEDA-ERA Square Mast is being used and its advantages can be exploited by both the GEDA Multilift P12 and the GEDA ERA 1200 Z/ZP transport platform. This is a genuine and specific benefit for rental equipment operators using the GEDA range because it saves both space and storage costs. One particular feature is that the GEDA-ERA Square Mast enables a free mast projection of 7.5 metres enabling two further complete stories to be accessed. Furthermore, the mast tie distance can be increased to 12 metres.

As with all GEDA rack and pinion lifts, the automatic lubrication device is included in the GEDA Multilift P22 Comfort as standard. Of course the “new boy” from GEDA complies with the European Machinery Directive and Product Standard EN12159.

A GEDA 1500 Z/ZP transport platform was also used in the renovation work as well as the GEDA Multilift P22 Comfort.
The transport platform combines two different devices into one, namely a materials hoist and a transport platform for people and loads.
With its 100 metre lifting height it can be used in a wide range of situations. The platform has a lot of space for bulky and heavy construction materials and therefore considerably improves logistics on the construction site. To meet the requirements of every different construction site situation, the customer can select from the various platform options which extend up to load capacities of 2,000 kg and the practical modular construction means that there are many different combination options. The B-Platform which is 1.45 x 3.3 x 1.1/1.8 m in size is being used on the Danish coast. The GEDA 1500 Z/ZP transport platform is guided along two steel masts. This two-mast system has already been used successfully many times and ensures a smooth and stable travel movement. 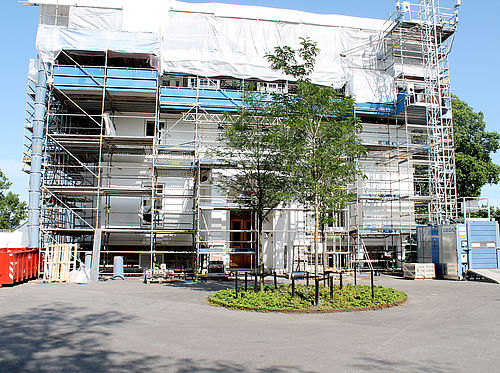 GEDA also has suitable solutions in its range for dust-free working on building sites. The low-maintenance GEDA Comfort construction rubbish chute is also being used on Hvidore. With its 6 mm wall thickness and additional 3 mm wearing ribs, the chute also scores through its extremely long operating life and the unparalleled quality of its high impact-resistant plastic. The GEDA construction rubbish chutes use all the benefits of plastic – they are very quiet, light and therefore easy to transport and fast to assemble. Double hooks enable secure assembly – for use on walls or scaffolding, a sloping roof or flat roof. The various fastening devices guarantee extremely short set-up times, making for efficient work. The practical accessories means it is possible to work dust-free (e.g. in inner-city areas) or to work on several floors simultaneously.

The renovation work on Hvidore has now been completed and the GEDA Multilift P22 has passed its first test in Denmark with flying colours. GEDA's partner Hejs dk. is also now totally convinced of its unparalleled benefits and has just ordered 10 more Multilift P22 devices for its rental stock. Copenhagen Airport, the famous Carlsberg Brewery and the new Microsoft building are just a few examples of the prestigious construction sites where height technology from Bavaria is being used.