Built in 1969 in the very heart of the city, the Kulturpalast is Dresden’s principal event venue. The building has been undergoing refurbishment work since 2013 with the help of height access technology from Bavaria, but not on the façade of the building as is usually the case, but rather untypically inside the building.

More than 40 years after its inauguration, the ravages of time continue to make their presence felt on the imposing building in the heart of Dresden. Comprehensive modernisation works are pending. In a Europe-wide architecture competition, the jury ultimately selected the design of the Berlin-based practice “gmp Architekten von Gerkan, Marg und Partner”. 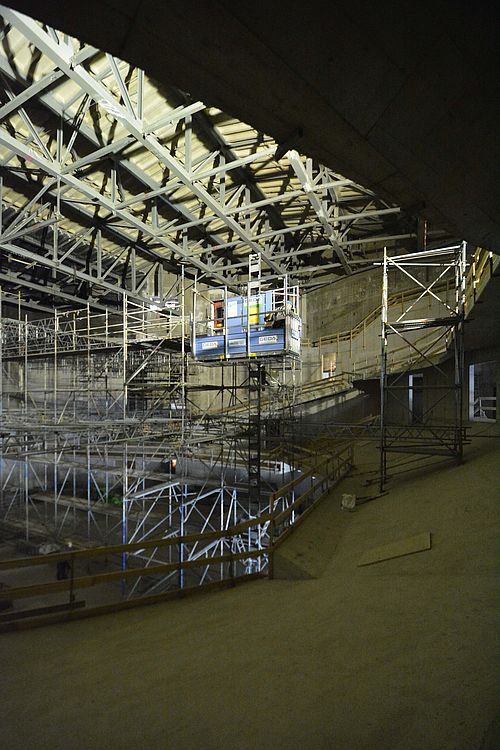 Work commenced officially on 11 October 2013 and since then the works have been in full swing. Whereas little is being changed externally on the building, the interiors are being fundamentally renovated. In addition to a new concert hall for the Dresden Philharmonic Orchestra and for other users, these renovations will create the Central Library of Municipal Libraries, a new venue for the “Herkuleskeule” cabaret theatre and the Frauenkirche Foundation Visitor Centre.
The new and architecturally unique concert hall will replace the existing multi-purpose hall and form the beating heart of the Kulturpalast project. Designed in the shape of a vineyard the hall will have excellent acoustics and the capacity to accommodate almost 1,800 visitors.

The unusual site conditions inside the Kulturpalast presented all the companies involved in the refurbishment with a challenge.
For example, the development of the future concert hall required an internal scaffolding framework which took almost four weeks to assemble. Only then could Lindner AG, the company commissioned to develop the concert hall, get to work.
In the subsequent construction phase of the concert hall a steel substructure is being built on the existing reinforced concrete walls which will form the substructure for the acoustic walls to be installed later.
It goes without saying that such extensive modernisation works require sophisticated technology which is why a height access solution from the Bavarian manufacturer GEDA Dechentreiter GmbH & Co. KG is being used in the new concert hall. GEDA’s long-standing partner, the company Baugeräte-Baumaschinen Diethelm Wagner (owner Mike Wagner), has rented the brand new GEDA 500 Z/ZP SL transport platform to the company carrying out the works. 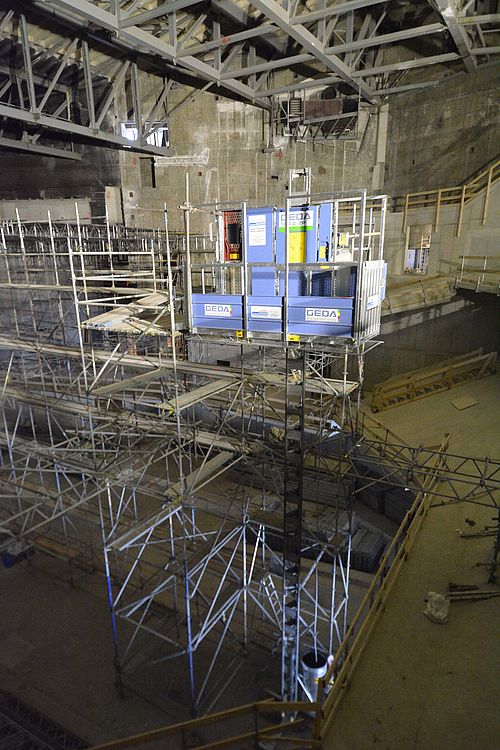 As with all GEDA rack and pinion lifts, the lubrication equipment is also included as standard in the GEDA 500 Z/ZP SL. This ensures significantly lower wear on the toothed rack and pinions.
And also as far as safety is concerned, GEDA offers the full package. Two Standard Basic GEDA landing level safety gates have been installed to ensure a safe passage from the platform to the two unloading points. Other winning features are the hot dip galvanised doors which are simple to assemble and can be installed either to open on the left or on the right. The GEDA 500 Z/ZP SL device is naturally equipped with the usual safety equipment such as limit switches, speed-dependent arresters, safety stop and overload protection. The platform can also be equipped as an option with roof and underride protection. Also not to be underestimated is the benefit provided by the GEDA Unimast system as this proven mast system can be used universally with the GEDA 300 Z/ZP, GEDA 500 Z/ZP and GEDA 1500 Z/ZP transport platforms and with the GEDA Multilifts P6 and P18. This means that, mainly in relation to rental equipment operators, minimum levels of investment are needed and space and storage requirements can be kept low. The GEDA 500 Z/ZP SL complements any rental equipment stock range, since it offers a customer solution for difficult to access construction sites which makes the workflow considerably easier.

The new concert hall in the Kulturpalast Dresden will be visually imbued with clear geometric structures. The highlight will be a fixed organ with 55 registers that will be particularly well suited for the symphonic repertoire of the 19th and 20th centuries. The refurbishment works on the Kulturpalast Dresden are due for completion in March 2017. Before the Dresden Philharmonic Orchestra can give their first performance in the unique and newly designed concert hall, the GEDA 500 Z/ZP SL still has valuable transportation services to provide in the new concert hall.