Eight mast climbing platforms and two personnel and material lifts from GEDA-Dechentreiter GmbH & Co. KG are being used at one of this decade's most ambitious construction projects.

For the YAMAL LNG project the Yuzhno-Tambeyskoye gas field on the West Siberian peninsula of Yamal is being developed and an LNG plant is being built with a planned annual output of 16.5 million tonnes of liquefied natural gas. The commissioning of the first of a total of three plants is already targeted for 2017, with the others scheduled for 2018 and 2019. The first construction phase for the liquefied gas storage tanks started about a year ago. The liquefied natural gas is to be delivered over the next 20 years into the Asia-Pacific region.

The project is being executed by Russia's biggest private gas company, NOVATEK, in collaboration with the French company Total and the Chinese CNPC. The plans also specify the construction of a seaport in the village of Sabetta on Yamal. 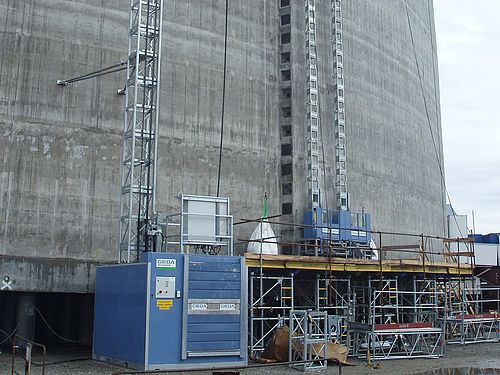 The two GEDA PH 2032 650 devices are transporting people and building materials to all levels of the LNG tank. The maximum lifting height of the power packs is 400 metres with a lifting speed of up to 90 m/min. The spacious platform has been designed for the transport of 2,000 kg and therefore has sufficient space to transport a maximum of 25 people and/or a wide range of construction materials. The lifting height on the Yamal LNG tanks is 46 metres.
With its PH series GEDA expertly complies with all big lift sector requirements. Customers have the choice of three standard models and depending on the circumstances of the construction site, these are adjusted to the necessary specifications such as platform size, lifting speed and lifting height. A single or double car can also be used.
The standard controls of level pre-selection, automatic or fully-automatic can be selected individually for each model. Different door systems in combination with the appropriate and requested electrically/mechanically locked landing gates round off the profile of the PH series.
Safety at the top exit points of the LNG Tanks is ensured by an appropriately high GEDA landing gate which meets all requirements set by the latest European Machinery Directive 2006/42/EC. The already known safety features such as the speed-dependent GEDA safety gear, overload protection, as well as limit switches at the top and bottom levels, are of course part of the standard package.
As with all GEDA rack and pinion lifts, the lubrication equipment is included as standard in the PH 2032 650 Single. This ensures significantly lower wear and tear on the toothed rack and pinions. 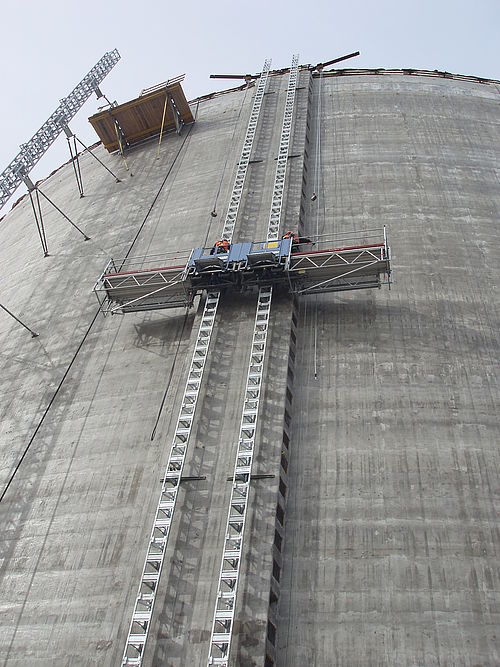 Pre-stressed concrete is being used for the concrete construction for the liquefied natural gas storage tanks with a GEDA MCP 1500 mast climbing platform deployed for the transportation of the materials required. The devices are attached to the ground of the external foundation in four places thus ensuring the transportation of people and hydraulic lifting jacks for the uniform stress and fixing of the prestressing steel.
GEDA's “electric scaffold” scores in many different respects, with one particular highlight being its ease of use and its simple assembly/disassembly. The advantages become clear as soon as the equipment is assembled. For example, during assembly of the pedestal, standard scaffold elements such as girders, scaffold planks, guard rails and toeboards can be used.
Using the well-known GEDA UNI-MAST segments with captive screws, it is assembled directly from the platform. With a hoisting speed of 9 m/min, the GEDA mast climbing platforms transport maximum loads of 1500 kg up to heights of 100 metres. On the Yamal-LNG tank the lifting height up to the top edge of the tank is 46 metres. The platform makes work both ergonomic and convenient since the device can be flexibility positioned along the façade. The platform also has a power supply point for work with a drilling machine or other electric tools, and
when compared with a traditional scaffold, the use of mast climbing platforms has other significant benefits. For example, wall surfaces can be worked on freely as there are no vertical pipes preventing access. The platforms can be adjusted to fit almost every construction site and wall projections, corners and curves present no obstacles. Furthermore, investment costs remain low, individual elements are transported in a space-saving manner and maximum safety and stability are guaranteed with a low setup outlay.
Extra safety is also provided by the overload indicator and disconnection of control system, an automatic incline adjustment and the diagnostics system contained in the control system.

Ambitious project for the future

It is not without reason that the Yamal LNG project is viewed as a strategically important building project. In addition to the “Sakhalin 2” plant, Yamal-LNG is currently the only ongoing large-scale project for the liquefaction of natural gas in Russia.
GEDA, the lift specialist, has had its own subsidiary in Russia since 2008. As well as the sales office and the warehousing facilities in Moscow, trading partners in virtually all regions of the country ensure individual customer requirements are met.