The renovation work on the St. Peter's Basilica in Dillingen already started back in 2015. The second of three work phases focused mainly on internal refurbishment, which also included the restoration of valuable paintings and art objects. A battery-operated material hoist from manufacturer GEDA was on a heavenly mission for transporting the precious cargo. 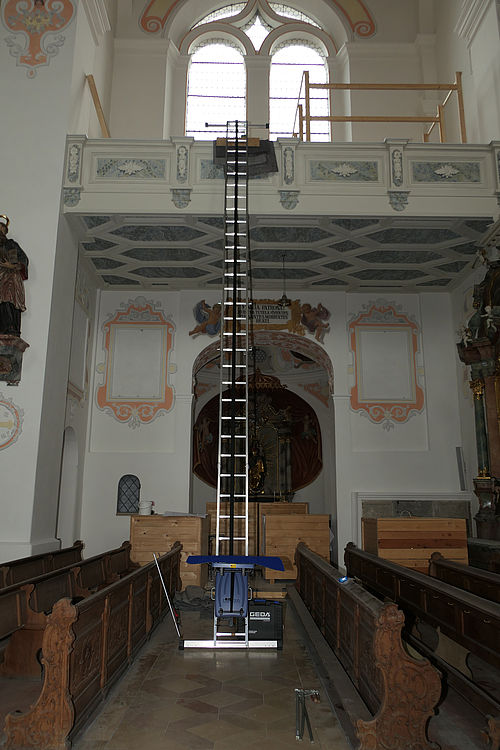 The St. Peter's Basilica was built between 1619 and 1628 and is one of the most important sights in Dillingen on the Danube. The basilica is the co-cathedral to Augsburg Cathedral and is therefore also dedicated to and the burial site for the Augsburg bishops. A variety of renovation work was carried out on the three-aisle hall church over the centuries. But the ravages of time keep battering the venerable house of God with fatal consequences - the basilica was at risk of breaking apart. Comprehensive renovation work therefore began in 2015.

The first work phase focused on preserving the structural integrity and the roof of the basilica. With a length of over 54 metres and a width of 22 metres, the church has the footprint of a cathedral. The height to the vaulted ceiling is more than 20 metres. This ceiling, however, was close to collapsing, as the heavy roof kept pressing the walls of the church further and further outwards.

Five steel braces now hold the two sides of the church together to stabilise the ailing building and prevent it from collapsing. The roof timbering was professionally repaired and reinforced by carpentry contractor Schwertberger from Donaualtheim. The 390 year old wooden beams are supported by steel girders and steel cables which hold the beams together over the entire length of 50 metres. New tiles returned the gigantic roof to its former glory and the tower was also comprehensively restored during the first work phase. These measures cost 2.8 million euros.

After the structural problems were resolved, the second work phase tackled the internal renovation of the basilica. 2.5 million euros are budgeted for this. The stucco and murals are to be preserved and restored to their former brilliance. The second phase also focused on restoring valuable paintings, statues and other art objects, some of them several centuries old.

To prevent damage to the artwork during the ongoing renovation work, all objects were wrapped carefully and temporarily stored on the gallery of the basilica. The experts at Schwertberger made use of a clever transport solution for transporting the delicate cargo: A battery-operated material hoist from the manufacturer GEDA-Dechentreiter GmbH & Co. KG from Asbach-Bäumenheim was used. 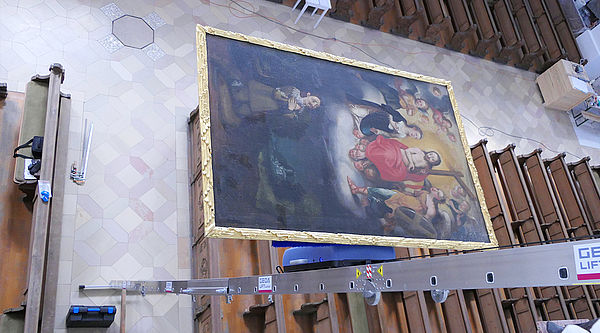 Cordless transport of the delicate cargo

Assembled by only one person in less than five minutes, the innovative GEDA BatteryLadderLIFT uses its powerful 24 V/10 Ah Li-ion-battery drive and three different platforms to transport all types of materials up to 120 kg. At the press of a button, the convenient radio remote control sets the hoist in motion from 0 to 15 m/min. As a special feature, the GEDA BatteryLadderLIFT can also be controlled with a smartphone app.

Whether restoration project or a new building - the compact material hoist can be used in virtually any situation. After a short battery charging time of only two hours, the transport system is ready again for its next deployment.

During its use at the Dillingen Basilica, Schwertberger was particularly impressed by the convenient design and fast set-up of the GEDA BatteryLadderLIFT. The platform kept the valuable paintings safely in place during transport to the gallery at a height of nine metres.

The GEDA LIFTLadder system additionally offers users a unique 3-in-1 benefit: Any height from 2.1 m to 10 m can easily be reached through a clever combination of the stepladder and/or lean-to ladder using the convenient ladder joining kit. Even when the GEDA BatteryLadderLIFT is not needed, the versatile robust ladder can be used as a traditional construction site ladder. All ladders of the GEDA LIFTLadder system bear the "made in Germany" quality mark.

After Easter Mass was celebrated in the Dillingen Basilica on Easter Monday 2019, all work is expected to be completed by late autumn 2019. After the internal renovation work in the second work phase, a third phase is already under way, with renovation work on the canopy, the St. Mary's Chapel, the front fountain and the six altars. In addition to this, installation of a new heating system is planned before worshippers can move back into the completely renovated church.